What is an add-on?

Open-cluster-management has a built-in mechanism named addon-framework to help developers to develop an extension based on the foundation components for the purpose of working with multiple clusters in custom cases. A typical addon should consist of two kinds of components:

In general, if a management tool working inside the managed cluster needs to discriminate configuration for each managed cluster, it will be helpful to model its implementation as a working addon agent. The configurations for each agent are supposed to be persisted in the hub cluster, so the hub admin will be able to prescribe the agent to do its job in a declarative way. In abstraction, via the addon we will be decoupling a multi-cluster control plane into (1) strategy dispatching and (2) execution. The addon manager doesn’t actually apply any changes directly to the managed cluster, instead it just places its prescription to a dedicated namespace allocated for the accepted managed cluster. Then the addon agent pulls the prescriptions consistently and does the execution.

The following architecture graph shows how the coordination between addon manager and addon agent works. 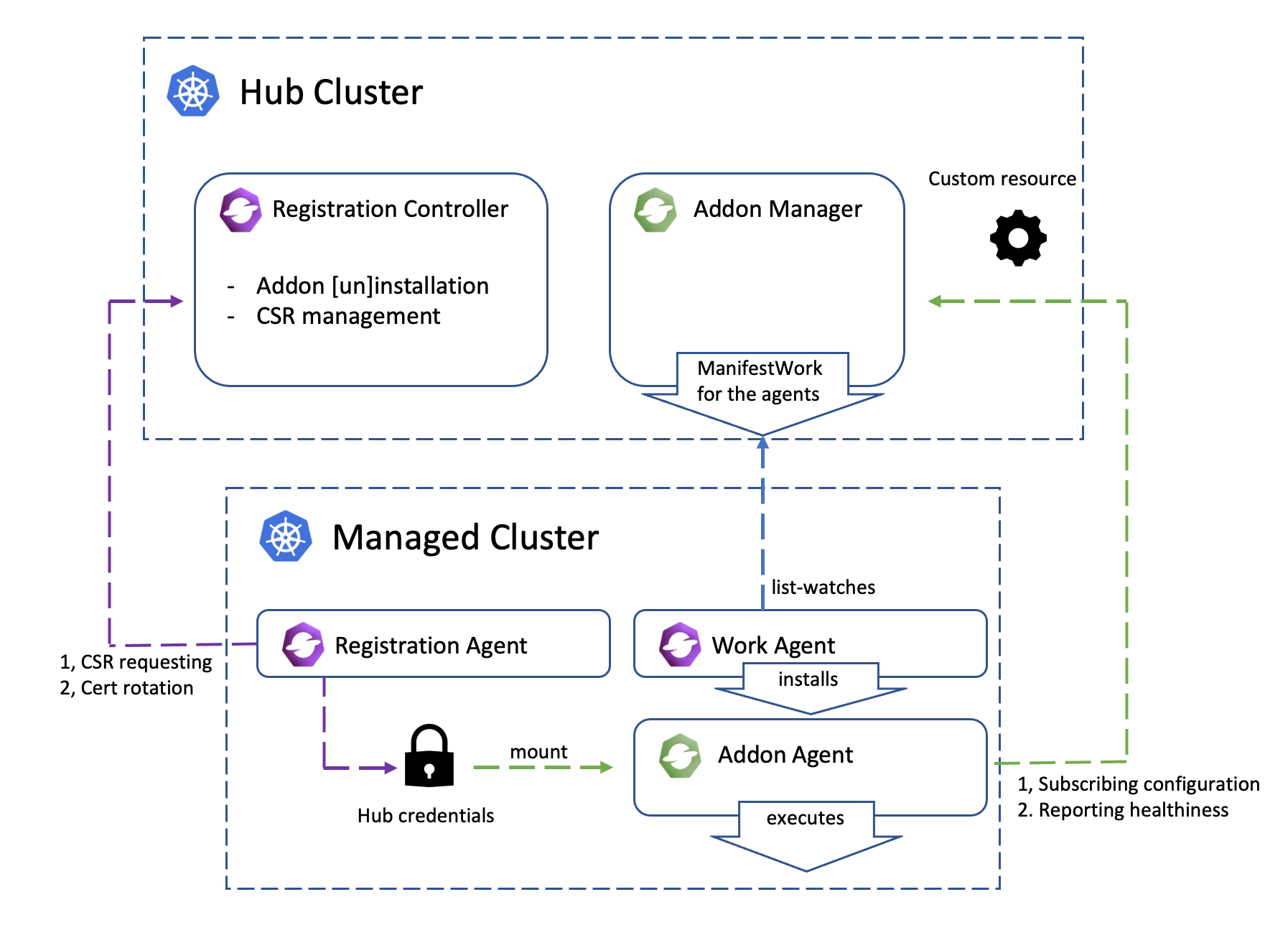 The addon manager running on the hub is taking responsibility of configuring the installation of addon agents for each managed cluster. When a user wants to enable the add-on for a certain managed cluster, the user should create a ManagedClusterAddOn resource on the cluster namespace. The name of the ManagedClusterAddOn should be the same name of the corresponding ClusterManagementAddon. For instance, the following example enables helloworld add-on in “cluster1”:

Last but not least, a neat uninstallation of the addon is also supported by simply deleting the corresponding ClusterManagementAddon resource from the hub cluster which is the “root” of the whole addon. The OCM platform will automatically sanitize the hub cluster for you after the uninstalling by removing all the components either in the hub cluster or in the manage clusters.

The healthiness of the addon instances are visible when we list the addons via kubectl:

The addon agent are expected to report its healthiness periodically as long as it’s running. Also the versioning of the addon agent can be reflected in the resources optionally so that we can control the upgrading the agents progressively.

Here’s a few examples of cases where we will need add-ons:

Add-on framework provides a library for developers to develop an add-ons in open-cluster-management more easily. Take a look at the helloworld example to understand how the add-on framework can be used.

However in some cases, we need to sign additional custom certificates for the addon agents which is not used for connecting any kube-apiserver. The addon manager can be serving as a custom CSR signer controller based on the addon-framework’s extensibility by implementing the signing logic. Note that after successfully signing the certificates, the framework will also keep rotating the certificates automatically for the addon.

The addon manager developed base on addon-framework will automatically persist the signed certificates as secret resource to the managed clusters after signed by either original Kubernetes CSR controller or custom signers. The injected secrets will be:

The addon manager can automatically install an addon to the managed clusters upon discovering new clusters by setting the InstallStrategy from the addon-framework. On the other hand, the admin can also manually install the addon for the clusters by applying ManagedClusterAddOn into their cluster namespace.